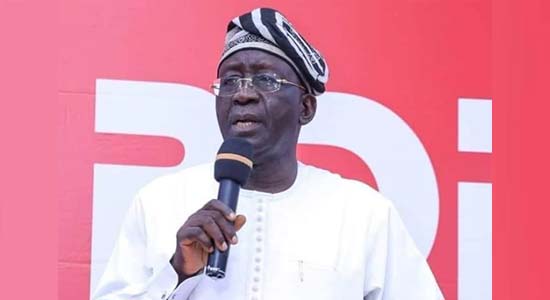 Former National Assembly members from the South-West have rejected calls for the resignation of the Peoples Democratic Party (PDP) National Chairman, Iyorchia Ayu.
The PDP South-West Forum of Former Parliamentarians, according to reports, made this known in a statement issued on Sunday by its Interim Coordinator, Yemi Arokodare.

The forum was responding to a call made by Oyo State Governor Seyi Makinde during a recent South-West stakeholders meeting with presidential candidate Atiku Abubakar in Ibadan.
The Governor stated at the meeting that Ayu must resign for the party to move forward, and that someone from the South West must hold the PDP chairmanship seat to demonstrate the region’s inclusion in the party’s processes.

Former lawmakers, on the other hand, believe Ayu should be allowed to stay in office until after the 2023 general elections, stating that they will continue to support the embattled National Chairman.

Read Also: DTHA 2023: Omelora’s declaration will spell doom for all his rivals

The forum urged PDP members across the zone to put aside personal interests and work for the party’s success in the upcoming elections.

The lawmakers, on the other hand, praised Atiku for his recent meeting with the party’s stakeholders in Ibadan, as well as Governor Makinde for hosting the meeting.
“We wish to appeal to all South-West leaders to pause a little on their request that the PDP National Chairman, Senator Iyorchia Ayu, step down as part of measures to address the lingering crisis in the party,” the statement said in part.

“If the current crisis in the PDP is allowed to continue, it will cause further imbalance and instability within the party.”

“While acknowledging the concerns raised by PDP leaders and stakeholders at the meeting about the need to ensure fairness and equity in the party structure, we noted the merit for South-West inclusion within the party, but we ask that this come after the election.”