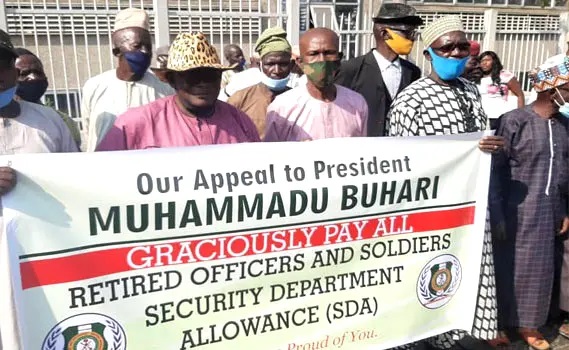 On Monday, some retired military officers protested at the Ministry of Defence headquarters in Abuja, organised by the Retired Members of Nigerian Armed Forces and the Coalition of Concerned Veterans.

Protesters who braved the early Monday morning rain in the federal capital bemoaned the non-payment of their Security Debarment Allowance, SDA, and other benefits.

Protesters, including relatives of the deceased personnel, blocked the access road to the Ship House, the ministry’s office complex.

As a result, the group has pledged not to leave the ministry’s entrance until their demands are met.

“We are here alongside our wives and children, as well as the widows of late military personnel and veterans who died in service, some of whom died fighting Boko Haram terrorists,” Mr Herbert said.

“We’ll be sleeping here until the Minister of Defense, Magashi, agrees to our demands,” he said.
Anna Nanven, the widow of a Corporal killed by Boko Haram terrorists in Borno State in 2015, complained that she had only received one allowance disbursement since her husband’s death.
“My husband was a young man, a Corporal who was killed by Boko Haram terrorists during an attack on the barracks where he worked,” Mrs Nanven said.

“I now live with his parents, and I bore him five children, three females and two males, until his death.”

“The children are 22, 20, 18, 15, and seven years old, and the two eldest, both girls, who have completed high school, are unable to attend university because I cannot afford their school fees.”

“I beg the President, the Minister of Defense, and Nigerians to come to our aid.”

“I’m suffering and living in poverty with my five children because I can’t afford to start a business and I don’t have a job.”