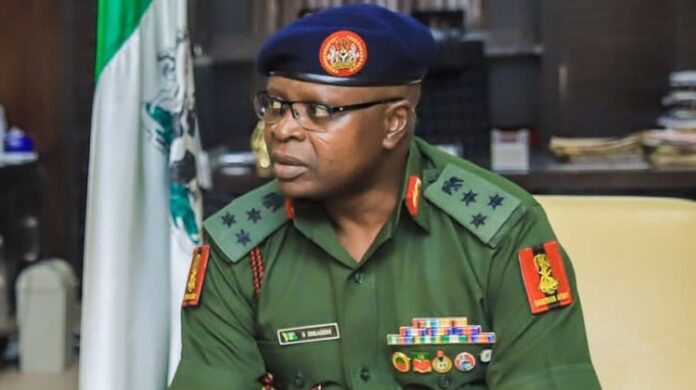 One of Africa’s globally celebrated novelist and erudite scholar, Chinua Achebe spewed this timeless maxim in one of his novels; “The man of the people is not about Harvard or Cambridge degrees; but the man that speaks and understands the language of the people.” Achebe’s wisdom sparkles with a timeless relevance in leadership on the African continent and Nigeria today, just like yesterday when the words were uttered.

The Director-General (DG) National Youth Service Corps (NYSC), Brigadier General Shuaibu Ibrahim has indubitably discerned and applied the wisdom of Chinua Achebe wherever he has rendered service to his country. His admirable philosophy resonates in the extra premium he attaches to the people he serves. The NYSC boss is synonymous with selfless service and the development of others, a leadership trait, which hardly shadows in most Nigerian leaders.

Ibrahim, a pioneer Registrar of the Nigerian Army University, Biu is a famed Military historian, scholar, administrator, pragmatist, teacher, pacesetter, innovator and workaholic. He knows his leadership destination and how to excellently navigate his path to success. Ibrahim is a perfect example of one of Nigeria’s genuine and committed leaders.

When the ideal marksman for a job is located, it is easy to notice. Since Shuaibu Ibrahim, the Nasarawa state-born Army General sauntered on stage at NYSC headquarters Abuja, the shining ambience of performance has been inescapable and a cynosure of all eyes.

For the NYSC boss, his current assignment is merely the return to a familiar turf, having served as a Military Assistant (MA) to a former Director-General of the scheme years back. It implies, he has a vast knowledge and experience of the internal operations of the scheme, which has been converted to a rewarding leadership asset for the discharge of formidable service to young Nigerian graduates.

From North to South and from Sokoto to Bayelsa, NYSC members ululate in unanimous tongues their endearing delights and joys with Ibrahim’s persona in his barely two years leadership of the scheme. For the Nigerian youth corps members, Ibrahim is one unforgettable and outstanding administrator of the NYSC.

And like in the catchy aphorism of Achebe; the NYSC boss understands and speaks the language of the people. He does not dispense it from the prisms of bossiness; but the people are excited because he shadows in a unique servant-leader style for the present and future prosperity of the Nigerian youths.

The NYSC DG’s personage embodies a humane, kind-hearted, compassionate, loving and generous personality to a fault. He has a palpable and enduring affection for progress and development of the Nigerian youths. Barely weeks after his appointment in 2019, Brigadier Gen. Ibrahim’s instincts and passion for work manifested. He paid a surprise working visit to the NYSC’s Sagamu Permanent Orientation Camp, in Ogun state in the wee hours of the morning.

The NYSC boss inspected facilities at the camp to ensure they were up to a standard that can guarantee at least minimal comfort for corpers. He gave fatherly counsel on discipline and obedience to constituted authorities to the 2019 Batch B Stream One. But what amazed corp members most in the early morning visit by the NYSC boss was that he gifted various groups of the corps members with memorably fanciful gifts.

Ibrahim, a doctoral degree holder in history and a resourceful military researcher of repute is not a friend to failure. So, he launched a vigorous campaign to terminate the reign of temporary orientation camps for NYSC members as soon as he assumed office. He frowned at the subsisting practice of some states which have converted schools into camps.

Therefore, as part of his focus on welfare of corpers, he engaged State Governors still operating in temporary sites to build permanent, and standard NYSC Orientation Camps. Excitingly, the tide has started changing very rapidly, with NYSC permanent camps in almost 32 states of the federation now. In tandem with these campaigns, several states in the country with dilapidated structures in their Permanent Orientation Camps have had them renovated with upgraded facilities for the comfort of NYSC members.

Ibrahim has his mind fixated in attracting extra stipends for Corp members from all the states of the federation to complement what is uniformly paid all corpers by the Federal Government. He has worked assiduously to ensure; every State Government generally pays a token to corpers posted on national assignments in their respective states as incentive for the national service to fatherland.

And to smoothen the path, domesticate and deepen the campaigns, Gen. Ibrahim has persuaded and lured some Governors to crusade for better welfare for youth Corp members. The strategy is working rewardingly, as excited corpers in states that have complied endlessly glorify the NYSC boss.

Gen. Ibrahim is seen by by corpers and Nigerians as one NYSC DG, who immediately implemented a new Federal Government approved allowance for corps members, which stood at N30,000. But he also, magnanimously added an additional N3,000 on the FGN’s approved N30,000 per corper.

These welfare initiatives by Ibrahim are to provide an elaborate window for prudent serving corpers to save part of their allowances, which they could invest into productive ventures after the one-year mandatory service. It’s a very commendable philosophy and the best way of expressing fondness to secure the growth and development of young Nigerian graduates.

Also intricately linked to the welfare of serving NYSC members, Ibrahim has prioritized the security of corpers wherever they are posted in Nigeria for primary assignment. The NYSC boss is mindful of the pervading insecurities in some parts of the country and has adopted water-tight security strategies and administrative protection measures for corpers.

In Borno, like in other states, where insecurity as induced by Boko Haram insurgency is prevalent, the DG has given a standing order that no corper should be posted to volatile or potentially risky areas. He has sustained an evergreen collaboration with security agencies to ensure the safety, security of lives and property of corps members are neither threatened nor comprised in any circumstance.

To this end, the NYSC DG is very strict against night journeys by corpers and has consistently persuaded the sick to always report to the authorities for prompt medical attention by the handy Corps Medical Personnel of the scheme. He is also passionate about protection of female corpers from exploitation while serving the nation under the scheme. He has never failed to warn female corp members not to compromise their dignity and womanhood for gratifications and has contrived secret ways to monitor such blackmails which leads to abuses of the womenfolk either by NYSC staff or employers of corpers.

When the Coronavirus pandemic broke out in Nigeria and caused nationwide panic, Brigedier Gen. Ibrahim immediately swung into action to protect the beloved graduate children of Nigerians entrusted in his care. After a prolonged closure of NYSC camps; but the necessity to reopen them in order not to stagnate the future of Nigerian graduate youths, Gen. Ibrahim did the needful to secure the lives of the youths entrusted in his hands.

He immediately secured all NYSC orientation camps throughout the country by putting in place essential measures endorsed by the National Center for Disease Control (NCDC) to prevent Covid-19 from invading the camps. He traversed the country on surprise visits to ensure its implementation.

Instantly, NCDC officials were deployed to NYSC camps for testing of prospective corp members and the officials before admission into the orientation camps. Hand sanitizers and reduction in the number of admitted corpers for each stream of the orientation exercise; spacing of hostel beds in consonance with the prescribed physical distancing regulation, compulsory use of facemasks and all other ancillary protocols of Covid-19 were strictly enforced.

Undeniably, Gen. Ibrahim is demonstrating to youths of Nigeria a kind of special fatherly love, which those who passed through the scheme before now never had the luxury of the experience. Nigerian youth corp members are convinced and indeed, sing eulogies of the DG for a rare exhibition of leadership, which they have admitted as close to their hearts.

The NYSC DG speaks to corpers in a language they have clearly decoded. Only a few leaders in the ilk of Ibrahim are prodded to speak the language of the people in Nigeria. What has remained unique in Gen. Ibrahim’s leadership style is his mastery and implementation of the techniques capable of changing the life fortunes of Nigerian young graduates within a year of his encounter with them under the scheme.

Agbese is a human rights activist based in the United Kingdom.

I’m proud to have selected you as my running in 2015, Buhari tells Osinbajo at 64