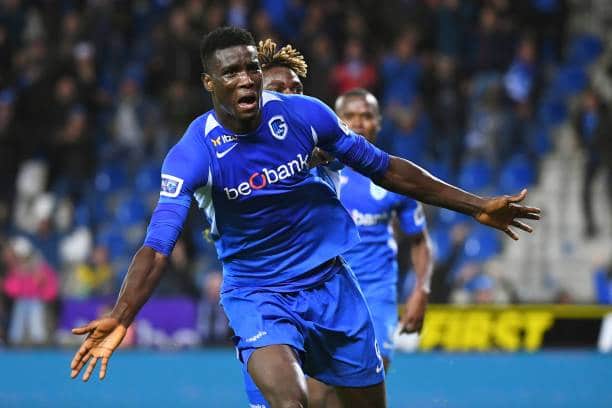 Nigeria international Paul Onuachu has revealed why he turned down an offer to join Club Brugge despite the Belgian Champions’ interest.

Onuachu was heavily linked with a move away from Genk during the recently concluded transfer window, with Club Brugge among the clubs interested in signing the Nigerian, but he believes it would have been a bad move for him.

In the last two seasons, Onuachu has been one of the best strikers in the Belgian top flight, as well as the striker with the most goals in the Jupiler League.

Despite interest from Brugge, Atletico Madrid, Lyon, and Arsenal, the Super Eagles striker is set to return to the Cegeka.

Speaking with Belgian publication, De Morgen, Onuachu admitted that indeed there was interest from Brugge, but added that dumping Genk for the reigning Belgian champions would not have made any sense.
“I was approached by Club Brugge, but why should I leave Genk for Brugge?” That’s a step backwards in my opinion, and you don’t do that. The board was equally adamant about not wanting that.

“It makes sense to me that I did not go to a domestic competitor,” Onuachu told Voetbalkrant, according to De Morgen.

In 2021, Onuachu won the Ebony Shoe, which is given to Belgium’s best African or African-descent player, as well as the Belgian Professional Footballer of the Year and top scorer’s awards.

He became the first Nigerian to win the award in 25 years after scoring 33 goals to become the top African goalscorer in the 2020/21 season.

Reps to meet ASUU, stakeholders to find a solution to strike